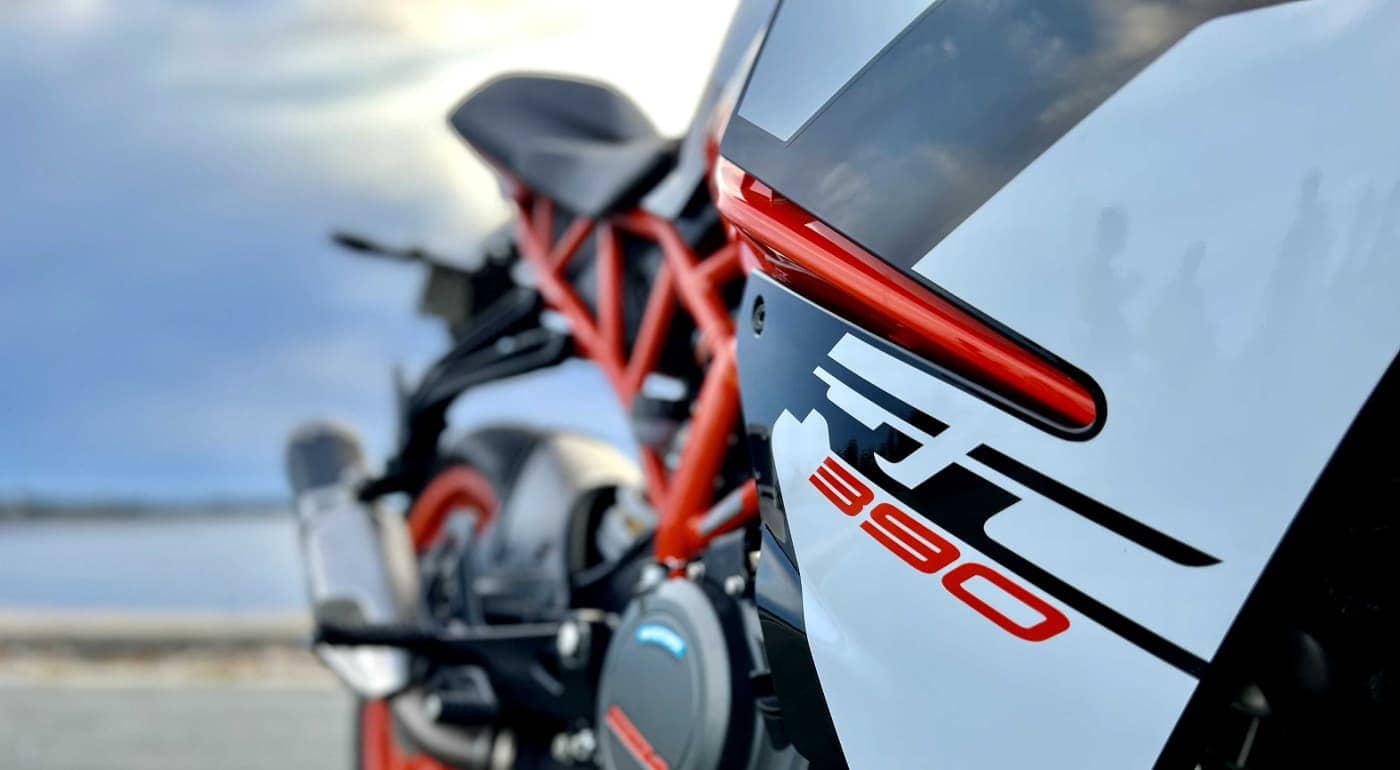 Welcome to my long-term KTM RC 390 review. It has been six months since I purchased my used 2017 KTM RC 390. Over that time, I’ve clocked just over 2,000kms — most of which has been spirited street riding.

In this review, I’ll answer your questions about reliability, performance and what it is like to live with. So, if you are considering purchasing a new or used RC 390, this is the review for you.

Is it a good motorcycle?

The reality soon dawned on me that I upgraded to the 600RR too soon. I spent most of my time on the 300R commuting with the odd-highway pull. When it came to cornering, I had no idea how to position my body properly, let alone how to get a knee down.

What put me onto the RC 390 is I wanted a forgiving bike that I could use to learn how to corner fast on. Since pulling the trigger and buying one, I have to say, it’s been one of the best decisions I’ve made so far on my motorcycling journey.

I’m blessed to be living close to some of the best riding roads in Australia. Almost every weekend, I’m out on my RC 390 practising the craft of cornering a motorcycle on my local mountain road.

It is here where my motorcycle riding skills truly transformed.

When I had the 600RR, I was scared that I was going to send it straight off the side of the mountain. With the RC 390, I don’t have that fear anymore as the power is much more manageable for my level of skill.

If you already own a supersport or a superbike then yes, the RC 390 will feel slow. However, if you are like me, and want a bike that will teach you how to ride fast then I don’t think there’s a better sportbike on the market other than the RC 390.

The biggest thing that turns people away from buying RC 390s is their reliability record. A quick Google search will uncover horror stories of low-kilometre motorcycles blowing their head gaskets.

However, if you spent a bit more time digging, you’ll realise this issue mostly affects the first generation of RC 390 produced from 2014 – 2016. For the 2017 model year, KTM revised the engine design in an effort to fix the head gaskets from going kaboom.

So far, my engine has not skipped a single beat. With now over 10,000kms on the clock, it isn’t exactly a new engine either. And whenever I ride the bike, I certainly do not go gentle on the engine.

If you want a reliable KTM RC 390, stick to the 2017 model year bikes and up. So far, I haven’t had a single reliability issue with my motorbike.

Let’s make one thing clear – do not buy the RC 390 if comfort is high on your pecking order. Out of all of the modern sub-600cc sports bikes, it has by far the most aggressive riding position.

The clip ons are low and the footpegs are high. I can last for about an hour on the bike before I start to lose feeling in my back and quads.

However, the committed riding position makes this motorcycle unbelievably fun to throw around twisty roads. I’ve yet to take it to the track, but I know these characteristics will even be further amplified in that kind of environment.

Is it a good beginner or entry-level bike?

Before purchasing my 2017 RC 390, I had a couple of years of riding experience under my belt. Safe to say that I wasn’t exactly a beginner when it came to motorcycle riding.

If you are wanting to purchase your very first bike, I personally would not recommend the RC 390. The bike’s application is too narrow for beginner riders who need a versatile do-it-all kind of bike. If you are not riding the bike flat out through the mountains or at your local track, it’s pretty horrible to live with.

How fast does it go?

For street use, the KTM RC 390 has almost the perfect amount of speed. One of the biggest things that I love about the bike is how it makes it power. The torque delivery is almost instant and remains constant throughout the powerband. This is unlike the R3 and Ninja 400 where torque begins to fall off after 9,000 rpms.

The powerband is particularly useful if plan on riding the bike through tight twisty mountain roads. Reaching peak torque lower in the RPM band allows you to accelerate faster out of corners. That way, you can focus less on shifting gears and more on your braking and cornering.

In terms of top speed, I’ve maxed out the bike at 163KM/hour which I believe is the electronically limited top speed.

What other sportbikes compare to it?

I test rode both of these motorcycles before I decided to purchase the KTM. Both the R3 and Ninja felt more like sports tourers where you sit ‘in’ the bike as opposed to on top with the KTM. The seating position makes a big difference when it comes to cornering.

I’ve found that unless you have your body leaning over the front of the KTM, the bike feels somewhat twitchy and unsettled while cornering. As I mentioned before, the KTM teaches you how to ride fast by almost forcing you to ride it like how a Moto3 rider would. It holds a candle true to KTM’s tagline ‘ready to race’.

In summary, although you could compare the R3 and Ninja to the KTM on spec sheets, they feel totally different in the real world. If you are considering any one of these sportbikes, I highly recommend you test ride all of them before you lay your hard-earned coin down.

For example, I was convinced that the Ninja was going to be the bike for me until I rode it. I hated how the fuel tank felt against my body and I felt much more comfortable on the KTM.

How does it perform on the track?

My next step with my bike is to take it out on track for a track day. I’ll update this post to include my experience once I have done so. I may also consider converting the bike into a track bike in future.

If you are considering purchasing an RC 390, the new 2022 model has received the biggest overhaul since the bike was first launched. The 2022 model addresses many of the previous generation’s weaknesses, such as:

Is it a good motorcycle?

Is it a good beginner bike?

How fast does it go?

What other sportbikes compare?

How does it perform on the track?

James Banks is your fellow motorcycle-obsessed editor-in-chief of Bikemod. When he's not penning articles for this site, he's throwing his KTM RC 390 over The Great Dividing Range or trying to make it go faster.